Our lab has continued the monitoring project into the 2016 season. This year, our main projects examine the overwintering behavior, alternative host crops, and ability of various trap attractants that will hopefully help better our understanding of these invasive pests.

The main takeaway from our monitoring so far is that SWD were detected in traps far earlier than last year. We suspect this is due to the unusually mild winter: 2016 is set to be one of if not the warmest years on record, and that means earlier SWD emergence. Last year the first flies were trapped on July 8th, and this year we started seeing isolated flies in traps collected June 23rd, more than two weeks earlier. We had previous reports of SWD in Door County several days previously, certainly a record. We don’t yet know how long they will take to peak or if they will peak in similar numbers as last year. Keep sending in any samples or fruit you may believe to be invested to help our investigation! 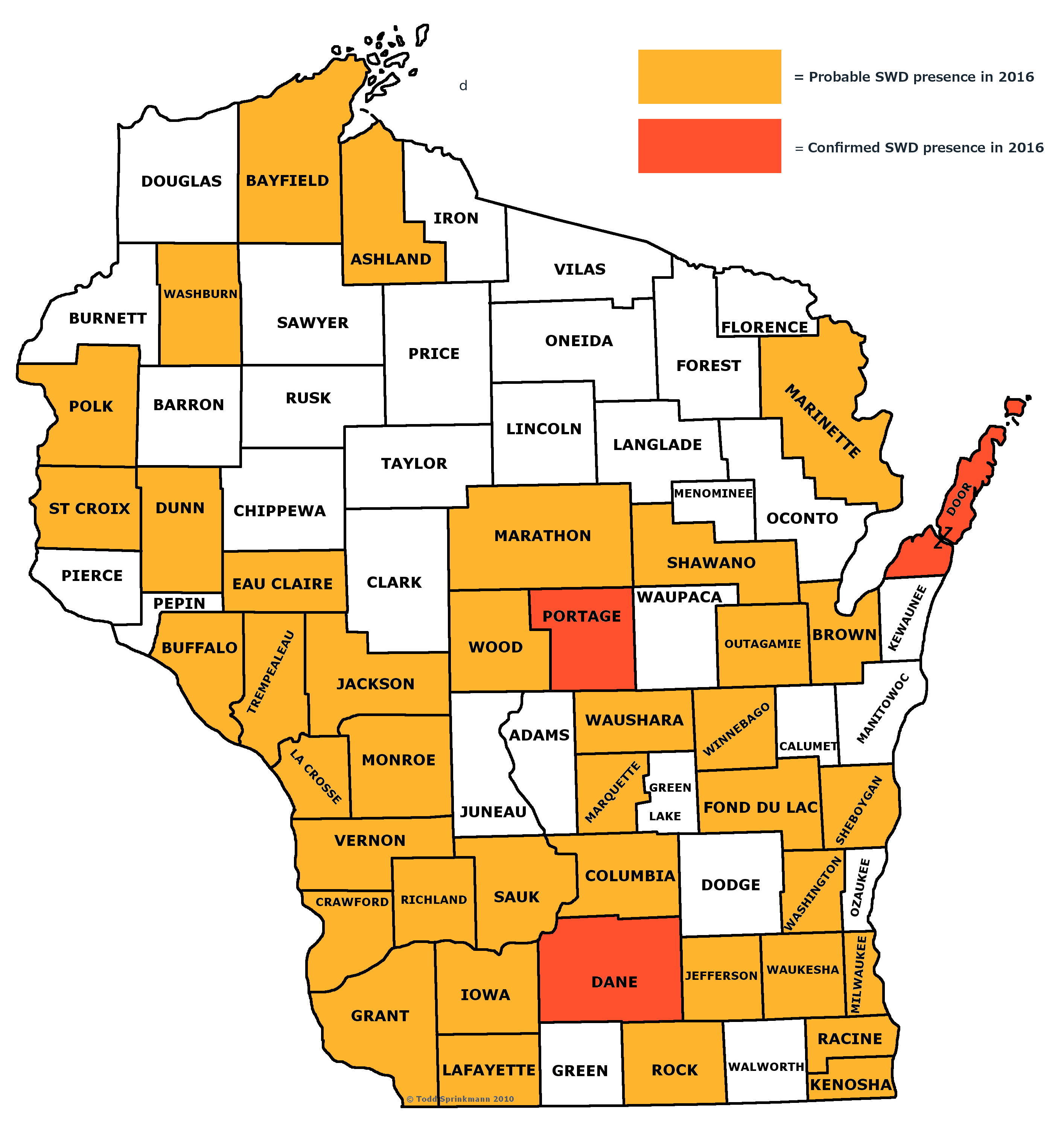 Based on the early emergence and the fact that SWD’s range is still expanding in Wisconsin, we suspect farms in all of these counties will have SWD by the end of the summer. Your samples will help us compare their size, anatomy, and emergence time, so if you have any flies or fruit please send them to the address listed under the “Contact Us” tab.

Thank you all for your support in the state-wide monitoring project. As of August 4th, Spotted Wing Drosophila has been confirmed in 13 counties: Pepin, Dane, Iowa, Rock, Burnett, Waushara, Door, Tomah, Washburn, Portage, Barron, Pierce/St.Croix, and Vernon. It is also suspected in Brown County. Keep sending in your samples and updates!

The winter morph monitoring project also continues as we trap across southern Wisconsin. SWD were first detected in the traps July 8th, with an average of 1 male and 1 female per trap. Numbers have increased to an average of 5 males and 30 females per trap on July 22nd. Traps are still being processed, but it appears that numbers will remain elevated.

We still have several months left in the winter morph monitoring project even after fruit season is over. In the 2014 season, SWD peaked around the third week of September. It was last reported the second week of November.

If you have any questions about the state-wide monitoring project, winter morph project, or SWD management, please contact Kathryn LeClaire at swd@russell.wisc.edu

Spotted Wing Drosophila: The Start of the 2015 Field Season!

The 2015 SWD monitoring project recently confirmed the presence of this invasive pest in Dane County on June 22nd. This is one week earlier than the first detection of SWD in Wisconsin last year. In 2014, we were able to confirm SWD in 33 Wisconsin counties. This early detection data will help us understand how to identify and manage this invasive species. Collaborators all over the state will be trapping with the standard yeast and sugar traps (Figure 1) until SWD is caught for 2 consecutive weeks. We will keep everyone updated with the data as it gets reported. 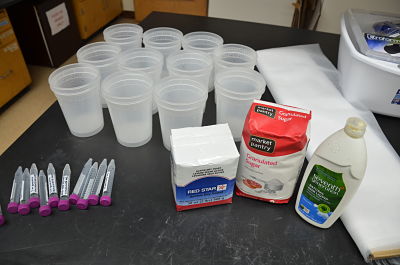 We want to remind everyone to start or to continue monitoring for SWD and also to think about different management strategies that will work best for your specific crop and farm. Updated management recommendations for raspberry, strawberry, blueberry, cherry, and grape can be found at the following links:

We are also continuing our SWD winter morph monitoring project (Figure 2). This data will provide important information regarding the biology of SWD in Wisconsin and its overwintering strategies. We will have more information and updates as the season progresses. Please check out our SWD website for updates. 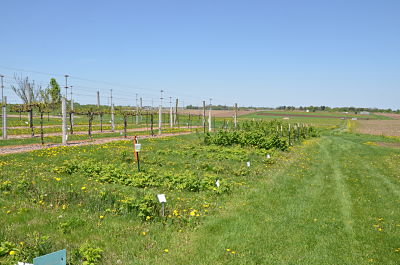 Figure 2: Sugar and yeast traps set up in a fall bearing and a summer bearing raspberry variety for the winter morph trapping study which will continue through November. Photo credit: Katie Hietala-Henschell

Spotted Wing Drosophila: What we learned in 2014 and outlook into the 2015 field season 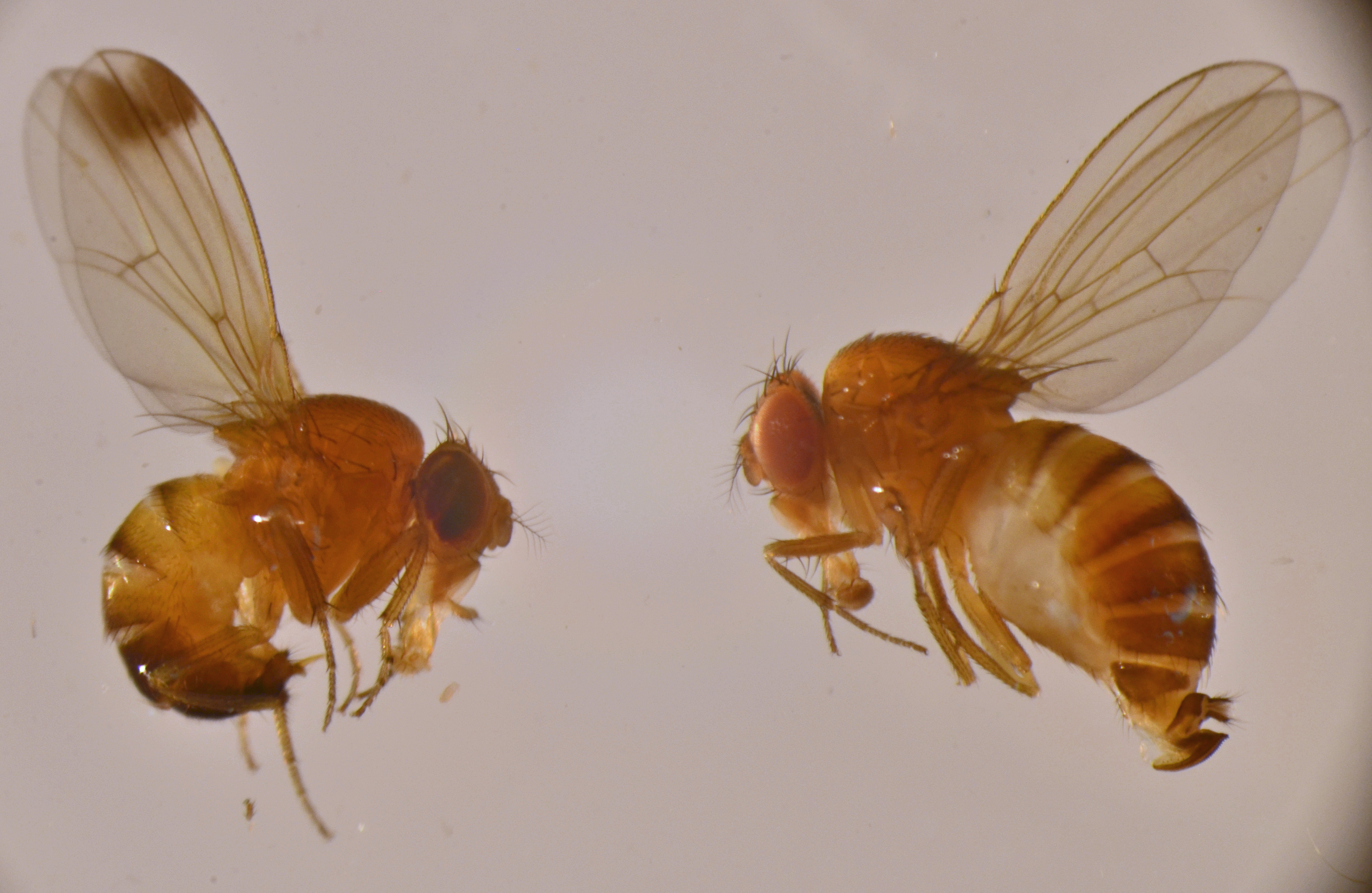 The now infamous Spotted Wing Drosophila (SWD), Drosophila suzukii, is an invasive vinegar fly from Eastern Asia that can cause significant damage to soft-fleshed fruit. We are slowly learning to live with it in Wisconsin since its first detection in 2010. It has now been detected in 33 counties (blue counties on map below) and suspected in 9 others (green counties on map). 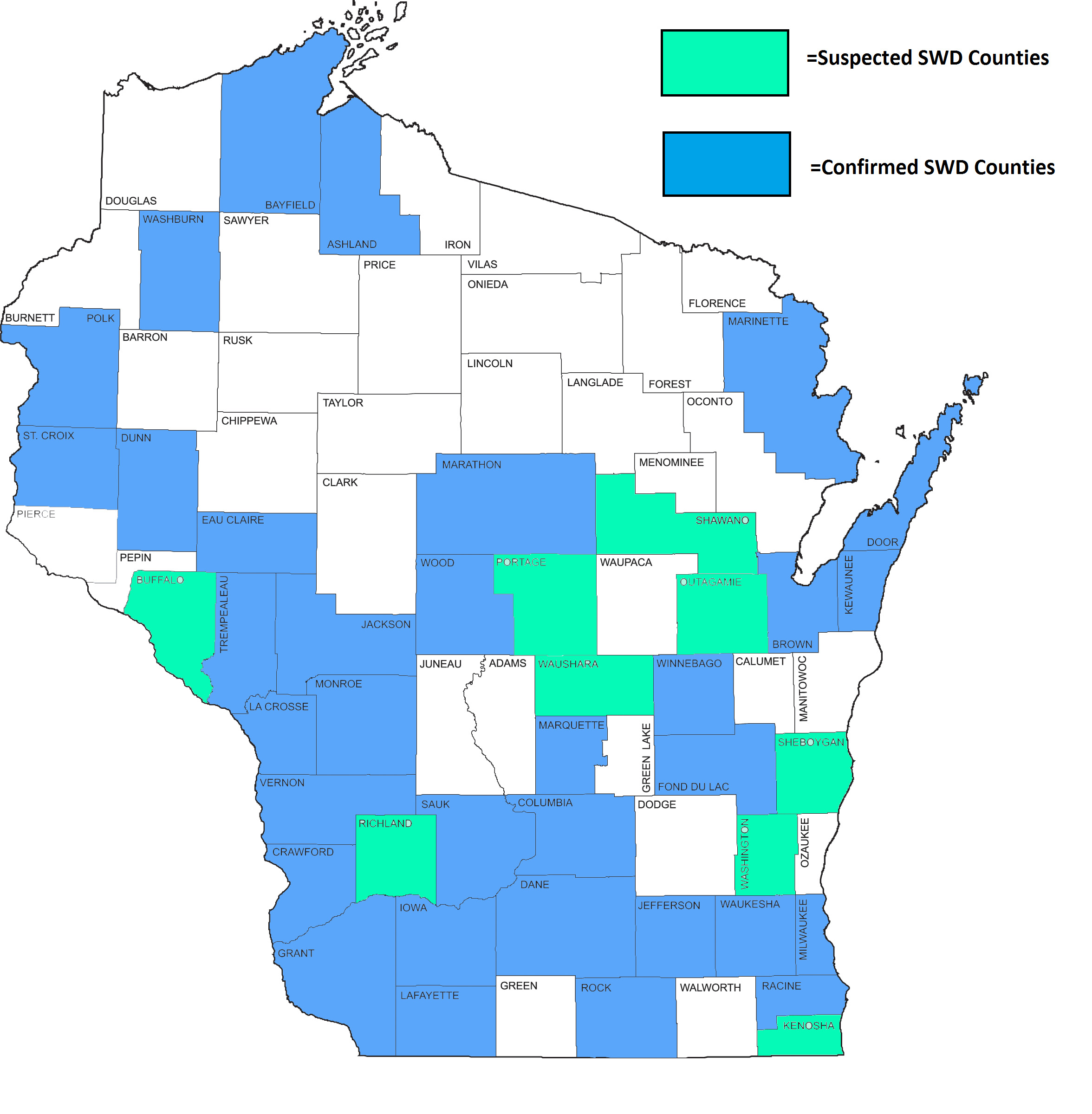 Since 2013, the Fruit Crop Entomology lab has been tracking yearly for first appearance of SWD to inform growers on when to begin trapping and to initiate their crop protection strategies. To achieve this, we have been coordinating a statewide monitoring project that has been generously funded by UW-Extension and the WBGA. As of May 29th 2015, no SWD have been detected in our traps.

As part of our research efforts on SWD, we also monitor populations throughout the season to obtain a better understanding of the fly’s seasonal phenology. 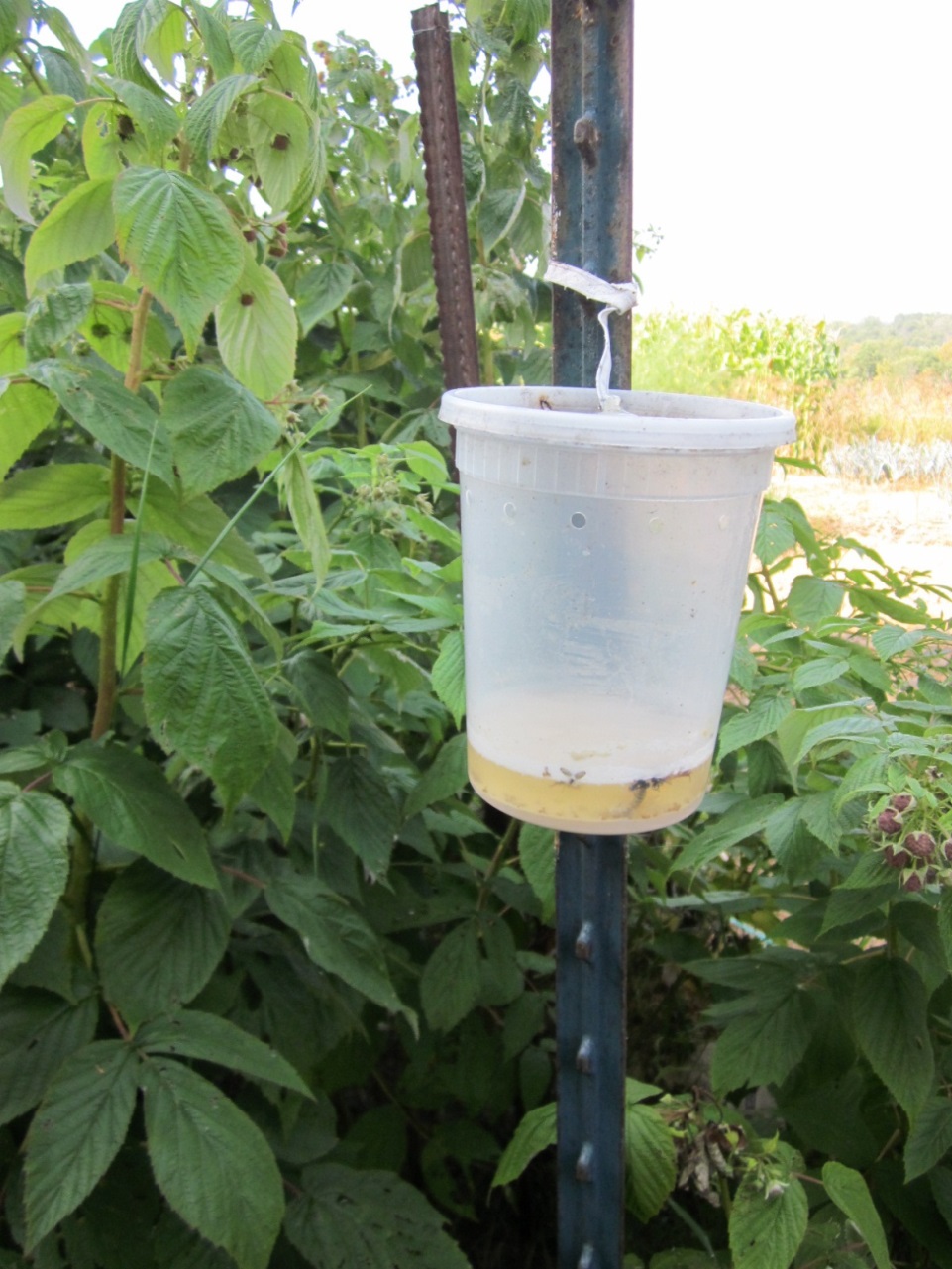 The monitoring project for first occurrence is currently underway. We have 16 collaborators participating and Kathryn LeClaire, a UW-Madison undergraduate who has worked with us since last fall on SWD, is now working as a UW-Extension summer intern. Kathryn is the coordinator for the SWD Monitoring Project. She will also conduct seminars with the Master Gardener Program, provide short informative films on SWD, and participate in fruit field days during the summer.

This summer we are conducting a DATCP-funded research project to determine the seasonal phenology of the SWD seasonal morphs and determine their reproductive maturity throughout the season. This study should give us a better understanding of SWD ability to overwinter in Wisconsin.

Commercial synthetic lures by Trécé Inc. and now by Scentry for monitoring SWD are available from Great Lakes IPM (http://www.greatlakesipm.com/). The lures are good for 4-6 weeks.

For more information and updates, check the SWD website at https://swd.russell.wisc.edu/.

For any question, contact Christelle Guédot at guedot@wisc.edu or at (608) 262-0899 or Kathryn LeClaire at kleclaire@wisc.edu

Spotted Wing Drosophila has now been confirmed in Crawford, Vernon, Iowa, Bayfield, Columbia, Dane, Sauk, Door and Trempealeau Counties. It is also suspected in Jefferson, Washburn, Kenosha, Wood, Pierce, Rock, Monroe, Buffalo, and Lacrosse Counties. Numbers of adults are still very low at each location, but larvae have been found in fruit at multiple locations. As you can see, SWD is rapidly appearing throughout the state at the same time suggesting that it is probably overwintering in Wisconsin.

Very few adults have been caught so far in traps baited with the apple cider vinegar. The reason could be that in previous years, experiences form other states were with vinegar that was changed less frequently than once a week. Odors emitted by the vinegar will change over time as it is fermenting in the trap. When changing the bait once a week, less fermentation occurs and the apple cider vinegar is likely to be less attractive. The yeast and sugar bait that graduate student Emma Pelton is using is much more attractive to SWD and is preferred for monitoring. This bait will attract flies earlier and in higher numbers than the vinegar. This is a big disappointment for our monitoring project as larvae are found before adults are caught in our traps. And if you ask me who comes first between the chicken and the egg, SWD adults should definitely be seen before larvae are found in the fruit!

We are thus strongly recommending to monitor for SWD in your crop with a yeast and sugar bait (1 Tbsp. active dry yeast: 4 Tbsp. sugar: 12 oz water), and take action if SWD is present and the fruit is at a susceptible stage.

Management recommendations for raspberry, strawberry, blueberry, and cherry can now be found on the Management page.

The first SWD caught through the monitoring project (apple cider vinegar trap) was found this week in Iowa County. You can track numbers of SWD caught per week on the Charts by County tab.

Between the monitoring project and the graduate student Emma’s project, we have now confirmed detection of SWD adults in Vernon, Crawford and Iowa County. Unconfirmed fruit infestation by SWD larvae have been reported in Crawford County.

Looking through our trap catches, we noticed some drosophila that could be mistaken for SWD males. They also have a single dot on each wing, however the dot is smaller and located at the very tip of the wing instead of on the upper side of the wing as it is on SWD male wings (see picture below). 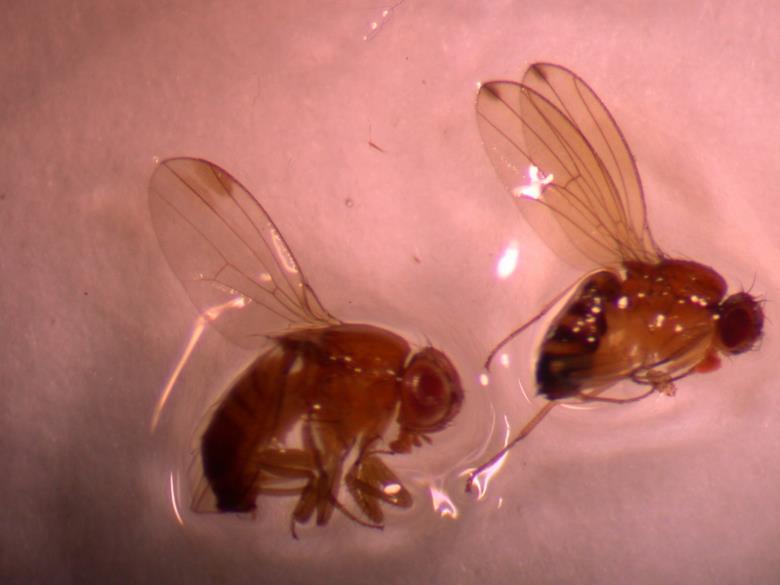 SWD male on the left and other drosophila on the right. Note the location of the dot on the wings and the size of the dots. Both flies have a single dot on each wing.

This other drosophila is not known to be a pest of any crop. We will keep you informed if we need to get concerned about it.

SWD has been detected in Vernon County. It was found today in a graduate student’s trap  from trap samples collected on June 24th. The trap was in raspberries (unripe) which had a confirmed 2012 infestation. Other traps being monitored in Vernon County have not reported SWD. If you haven’t put your monitoring traps out yet, do so ASAP!

As of July 5th, no SWD have been caught in any trap in WI. Let’s hope that this trend continues!

Also, please join me to wish Julien success in his new position. It was a pleasure having Julien in the lab for the past 2 months and he will be missed (especially our little conversations in French!)

Our new staff on the SWD monitoring project is Chris Pontius. He started with us a couple months ago and will take over Julien’s duties as of Monday. Welcome Chris!

As at June 7th no Spotted Wing Drosophila has been trapped in any county of the state.

The 2013 SWD Monitoring Project aims at detecting SWD presence throughout Wisconsin, describing the phenology and density of populations, providing support to fruit growers on how to identify and manage this invasive species, and providing the Wisconsin Berry Grower Association with weekly updates on the occurrence of SWD in Wisconsin.

Twenty collaborators have signed up (see map below, each yellow star designates the county where a collaborator is trapping SWD), including county extension agents and berry growers throughout the state. Each collaborator was provided with three traps, bait (apple cider vinegar), and other trapping material. Each collaborator set up and services these three traps weekly from April-May (depending on location) until October (or until no flies are caught). Each collaborator will identify and sex the flies, and then report the data on the UW SWD website https://swd.russell.wisc.edu/. The data entered is then compiled by Julien Gayno and Christelle Guédot and reported back on the website by county to be accessible to everyone, i.e, growers, extension agents, consultants, and the general public. 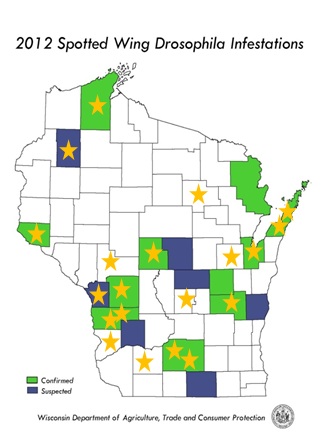 Good news: No SWD have been trapped so far!

Please, stay tuned for updates both in the WBGA newsletter and on the UW SWD website https://swd.russell.wisc.edu/